The Rise and Fall of the Scrap Industry in North America

That probably was true at the time. Many fortunes were made in the business due to WW2, the Korean War and the Vietnam War. These events were major drivers in the fortunes of scrap dealers at the time and many of those that were smart enough invested their money in real estate or something else less volatile. Those that weren’t smart enough, in hindsight, invested in their businesses.

These investments were weird, if you could call it that. Most scrap dealers at the time would buy used equipment for a fraction of the cost of new stuff and they would patch it up and make due. Yards were filthy mud holes and often un-navigable after the spring thaw or a good rain. No customers knew anything about weights and were glad to have someone haul off the scrap and give them some money and everybody in the business made a ton of money. If you looked around one of these scrap yards at the time you would see piles of high grade industrial scrap and for the most part, you couldn’t give away scrap washers and dryers.

Fast forward to the early years of the 21st century and the landscape is completely different. Industrial production has moved offshore and the scrap you find in most yards today consists of junk, literally. Old washers, dryers, refrigerators, cars and other household and machinery waste make up the feedstocks and instead of men cutting with torches and old style cable cranes moving the scrap around, you see hugely capital intensive equipment to shred this waste into some type of manageable recyclable material. Fancy hydraulic cranes move the scrap around at lightning speed and efficiency and most of the yards have poured concrete or asphalt to combat the potential soil contamination and mud. The major steel mills all own scrap yards because they misguidedly thought if they owned yards they could control the price of scrap.

But the opposite is true. As in every other boom, too much capacity was created and today many of these mega-shredders lay idle due to lack of feedstock. This scrap “famine” has occurred for two reasons. Firstly, the mills, in an effort to compete with the Chinese (big joke there) have forced the price of scrap down so low that in many areas it doesn’t pay to pick it up. Auto wreckers won’t sell scrap at these levels and demolition jobs have been postponed because there is no longer a positive asset value, since the recovered metal is so cheap.

Add to that the fact that most “Mom and Pop” recycling companies have closed due to the lack of scrap and the fact that the mega-shredders have forced them out of business. Maybe bigger isn’t always better?

In the past eight years, some of the most predominant names in the scrap industry have either gone bankrupt leaving customers with huge amounts of unpaid scrap loads or they have just closed up and will never re-open, their yards worthless pieces of land because in the go-go years, who cared about the environment?

So how does one protect themselves against the possibility of selling scrap to someone and not get caught in a Chapter 11 bankruptcy proceeding?

In the 2015-2016 periods, we have witnessed 5 of our major consumers slide into bankruptcy with three of them going Chapter 7. If we did not have insurance, these results would have been detrimental to the health of our company and in some cases, the health of our suppliers due to lack of payment. As well, having the necessary permits not only protects the generator, but protects the scrap dealer from the punishing fines associated with not abiding by the law.

Unfortunately we can’t turn back the hands of time, but we can learn from our mistakes, so take heed and be careful and like they say in the song, “Every little thing gonna be alright”. 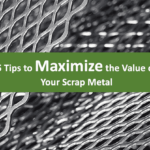 5 Tips to Maximize the Value of Scrap Metal

Turning an Expense into Profit